What impact will new Prime Minister Rishi Sunak have on the UK property market?.

What impact will new Prime Minister Rishi Sunak have on the UK property market?.

This is an interesting time for the UK property market. Interest rates are higher than they have been for decades and the increased cost of living has many questioning whether now is the right to continue putting money into property.

Investors and homebuyers are faced with new questions on what seems like a daily basis at the moment. Now, the new Prime Minister, Rishi Sunak MP, and his team will have to act quickly to calm the market and restore the economic confidence that everyone needs.

The initial reaction of the markets to the announcement that Sunak would be the Prime Minister were positive. Pound Sterling (GBP) rose slightly following the recent fall caused by the disastrous economic policies of the previous Prime Minister, Liz Truss. While it was pushed back down slightly by a strong Dollar, we can take this as a sign that the markets have more confidence in Sunak.

Likewise, the gilt markets rallied following similar troubles, and investors in those saw yields rise accordingly. As noted by Oliver Shah, Associate Editor of the Sunday Times, this included five-year swap rates that are of particular interest to property investors. This is the rate of interest payable on some long-term financial transactions like property, and it had ballooned to more than 5% under the previous administration. The news of Sunak’s victory pushed it down sharply to just over 4.6%, which is good news for the property sector as a whole.

Lawrence Bowles, director of research at Savills, agrees with this positivity, saying: “The uncertainty of the last few months has had a material impact on gilt rates: the rate at which the UK government can borrow. In turn, this impacts the cost of borrowing for the rest of us. It affects mortgage rates for home buyers, development debt costs for housebuilders, and refinancing costs for property investors.

“Anything that helps bring certainty and confidence back to the market is likely to reduce borrowing costs. That, in turn, will reduce affordability pressure for households securing mortgage finance, for housebuilders starting on new sites, and for investors buying and operating homes for rent.

So, it is clear that Sunak’s appointment as Prime Minister has delivered some immediate benefits for the housing market that investors should take note of. The confidence he inspires in the market has settled the worst of the nerves, and the upcoming Budget at the end of October offers Sunak and his new team an opportunity to further embed certainty into the markets once more.

While it is impossible to know exactly what will be in that Budget, it is reasonable to predict that housing will be a major focus. We are likely to see additional clarity around housing policies – including rental reform, cladding, planning reforms and more – as the government attempts to return to ‘business as usual’.

This is likely to be welcomed by the markets, and it would not be a surprise to see borrowing costs fall again as confidence returns to the national economy.

However, as noted by Tom Bill, head of UK residential research at Knight Frank: “Falling borrowing costs will support demand and transaction volumes in the UK housing market, but this should be seen in context. Mortgage rates may come down compared to the period following last month’s mini-Budget but a 12-year period of ultra-low borrowing costs is over. As demand subsides, 18 months of double-digit house price growth will also come to an end.”

On the surface, the end of double digit house price growth sounds like a definite downside for property investors. It is true that a reduction in house price growth will cut profits – but is it all negative? For a start, there are suspicions that ongoing house price growth at this level will eventually lead to a much larger crash, and that is something all investors will surely wish to avoid at all costs.

Secondly, property investment is most successful when entered into as a medium-to-long-term prospect. A slight reduction in annual growth is not necessarily a negative if it leads to a more sustainable sector which delivers high returns for longer.

Indeed, overall confidence in the market appears to be as strong as ever, even before Sunak’s promotion to Prime Minister. Research carried out by Yopa over September and October 2022 – the worst of the economic crisis – shows that people’s faith in housing remains unshaken. Despite conditions being the worst they have been for decades, more than 46% of respondents thought it was a good time to buy more property, and more than 57% had confidence that house prices would continue rising regardless.

This level of confidence is almost unprecedented in today’s economy and it speaks to a market underpinned by sound fundamentals.

The overall lack of available supply will continue propping house prices up, and that situation is unlikely to change given that current building levels create a shortfall of tens of thousands of homes each year.

It is to be expected that further clarity from Sunak’s government will continue to increase confidence in the market. Even if borrowing rates remain higher than expected for the short term, a Sunak government can gradually bring those back to more reasonable levels as normality is restored over time.

What does this mean for investors? If the UK property market fundamentals of demand being far higher than supply stay true as mentioned above, but the current market situation is not ideal, there is one obvious course of action.

By investing in off-plan property in the UK that is still under construction, you can make the most of a market that is still performing extremely strongly and avoid the worst of the current economic conditions at the same time – the best of both worlds.

Whether you are paying in cash or with a mortgage, you will not have to provide the majority of the funds until the property is complete. This gives interest rates and the mortgage market time to return to more a more favourable state for you, while at the same time your property will be generating capital appreciation as construction goes on.

By investing off-plan in a strong, growing market with future potential such as Manchester or Birmingham you can buy at what will end up being a below-market price and maximise your returns. At the same time, you will minimise your costs by waiting out the current tough economic moment and borrowing when rates are better.

Want to learn more about investing in off-plan property in the UK? Get in touch with your team today for more information by clicking here. 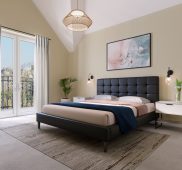